The Dish From the Dog

Woof to you,
I thought yesterday was going to be a day of Z’s but it turned out to be a day of surprises and excitement for our neighborhood.
Our next door neighbor woke us all up from our afternoon naps by yelling, “Hey, there’s a wild animal out here!”
Of course we all went outside fast to see what it was.
It escaped from under their garbage can cover and ran into our front yard.
Mark, the boy next door who always comes to play with me, helped his Dad catch it by putting his bicycle basket over it. This way everyone could see it safely and try to figure out what it was.
It was a smallish kind of furry critter with dark brown, very nice fur and a skinned hairy kind of tail. Looked kind of round to me but on closer examination, it was a little flattened out. Mark thought the tail looked like a small animal surfboard.
It had cute little hands and feet and a pointy nose. Little eyes too.
I think it was confused and a little scared. Everyone wanted to see it and figure out what it was and where it came from and everyone talked about where the best place it should be was.
No one had seen anything like it in our yards before.
I had never seen anything like it on my nightly walks either. And I have seen possums, raccoons and rabbits at night.
At first the next door neighbors thought it was a mole and then my humans went into the house to check on their computers to see what they could find. They thought it seemed more like a pocket gopher. The picture was close to what our visitor looked like.
The neighbors called wildlife animal control but no one was there because it was closed on Sunday.
Some people thought it should just be let go but then another neighbor came over and said he and his kids had seen it wandering around for two nights in their yard.
It seemed to be lost.
Then my humans found a matching photo on line and it turned out to be a little muskrat. They found information about how it likes to live near the marsh water and eats vegetation and has burrows to live in at the water’s edge.
Boy, that sure didn’t sound like our yard, even though we have a pool in the back.
Maybe that made it think we looked like its home.
My humans, Tom and Florence, were concerned over it having its own safe home and food. It was getting windy and colder as the afternoon sun started to set. So they got a box and the boy next door helped get the little brown furry guy into it and they took it in the car to the wildlife area near us that has other muskrats and the right kind of environment and food and shelter and safety for it.
Florence talked nicely to it all the way so it wouldn’t be too scared.
I bet it was the first time the muskrat ever rode in a car!
I love riding in the car but I’m used to it and I’m big enough to look out the window.
The drive took only a few minutes.
When they got there, they parked the car and took out the box carefully. Holding it and talking gently to the critter all the way, they hiked way under the trees, into the bushes, until they got to the reeds where it was marshy.
They found a good spot where the muskrat could have choices of either going into the reeds or under the trees. They set the box down and opened it.
The muskrat kind of scooted out, looked around and ran back into the box. Then it walked out slowly and looked around and back at the box; then up at Florence.
She told him that he would meet other muskrats and make lots of new muskrat friends and that he’d have good food that was healthy for him in this new home. She told him to stay away from the roads because they were dangerous and he might get run over. (She had seen some muskrats that didn’t make it across the highway by our house and she wanted him to be safe.)
He looked up at her and listened. Then he scurried into the underbrush of the reeds; stopped; looked back one more time and zip! Off he went into his new home.
Next Florence had to find the car keys that slipped out of her pocket. Boy, if the Key Finding Angels hadn’t helped, she would have had to walk home! Plus it was getting dark.
She found the keys in wet reeds on the ground and came home to tell us that the rescue was complete and the little muskrat had found a better home than ours.
Good thing too because the information on the computer wildlife sites all said that small wild animals who wander into human neighborhoods have to look out for cats. And we do have lots of cats coming by day and night!
Lucky for this visitor. He had a very hectic visit and got home safely.
Whew!
I thought he was cute and smelled interesting.
Who is the most curious visitor you’ve ever seen at your house?
Woofs from,
Bailley 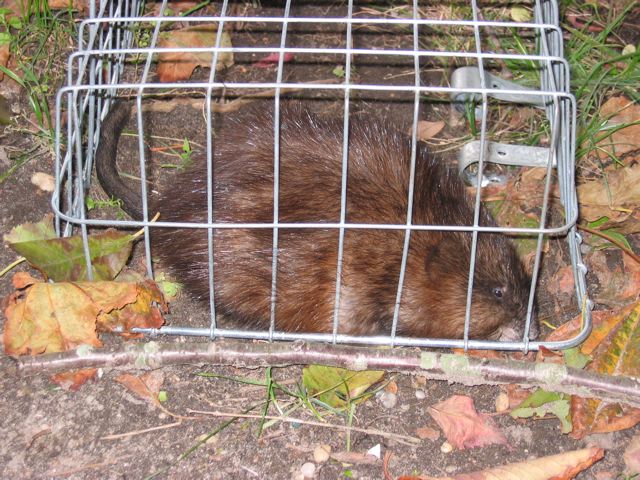 Going out of the box

New Home..now you see him; now you don’t!